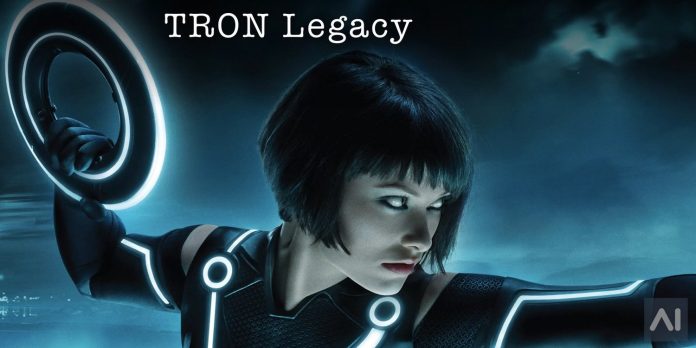 Tron: Legacy is a 2010 American science fiction action film directed by Joseph Kosinski from a screenplay written by Adam Horowitz and Edward Kitsis. It is a sequel to the 1982 film Tron, whose director Steven Lisberger returned to produce. The cast includes Jeff Bridges and Bruce Boxleitner reprising their roles as Kevin Flynn and Alan Bradley, respectively, as well as Garrett Hedlund, Olivia Wilde, Beau Garrett, and Michael Sheen. The story follows Flynn’s son Sam, who responds to a message from his long-lost father and is transported into a virtual reality called the Grid, where Sam, his father, and the algorithm Quorra must stop the malevolent program Clu from invading the real world.

Interest in creating a sequel to Tron arose after the film garnered a cult following. Most sequences were shot in 3D and ten companies were involved with the extensive visual effects work. Chroma keying and other techniques were used to allow more freedom in creating effects. Daft Punk composed the musical score, incorporating orchestral sounds with their trademark electronic music.

Upon its release, the film received mixed reviews from film critics, who praised the visual effects, production design, and soundtrack, but criticized the character development, cast performance, and story.

Sam Flynn, the tech-savvy 27-year-old son of Kevin Flynn, looks into his father’s disappearance and finds himself pulled into the same world of fierce programs and gladiatorial games where his father has been living for 20 years. Along with Kevin’s loyal confidant Quorra, father and son embark on a life-and-death journey across a visually-stunning cyber universe that has become far more advanced and exceedingly dangerous. Meanwhile, the malevolent program CLU, who dominates the digital world, plans to invade the real world and will stop at nothing to prevent their escape. [ZootCatchy]