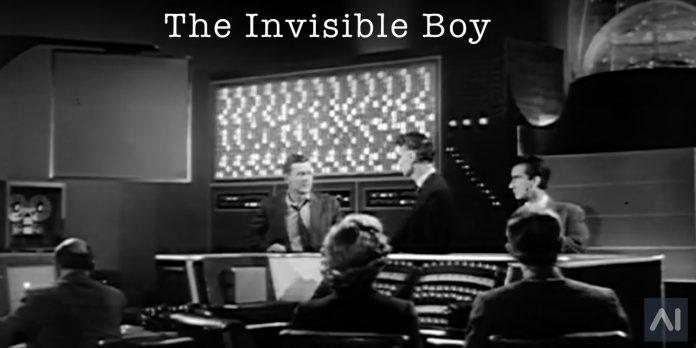 The Invisible Boy (aka S.O.S Spaceship) is a 1957 black and white American science fiction film from Metro-Goldwyn Mayer, produced by Nicholas Nayfack, directed by Herman Hoffman, and starring Richard Eyer and Philip Abbott. It is the second film appearance of Robby the Robot, the science fiction character who “stole the show” in Forbidden Planet (1956), also released by Metro-Goldwyn-Mayer. According to an implied, subtle backstory in The Invisible Boy, the robot is the same character as that in Forbidden Planet, which is set in the 23rd century; Robby is brought back to the film’s mid-20th-century era by time travel.

A ten-year-old boy and Robby the Robot team up to prevent a supercomputer from controlling the earth from a satellite.

Timmie is a typical ten-year-old boy: he loves fun and mischief and hates to study. When his scientist father, in an attempt to improve Timmie’s mind, plops him in front of the Super Computer, the boy learns more than how to beat his dad at chess. With designs on world domination, the computer has Timmie reactivate Robbie the Robot and directs the metal hulk to do his bidding. But while Robbie is an efficient minion, can he be made to harm the boy who gave him life? [Chris Stone]