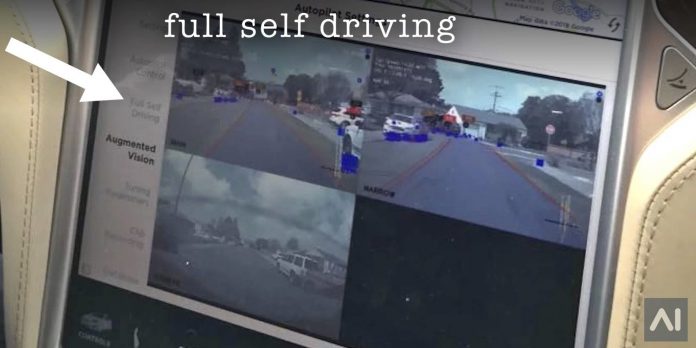 Tesla’s full self-driving autonomous vehicle feature is coming. An image leaked on Tuesday apparently shows the new user interface of a test-car. The image shows how the autopilot software/system views and interprets the world. The view has strong similarities to previous autonomous driving videos released by Tesla, there is now an option called “full self-driving” indicating a more advanced mode suggesting complete autonomy of the car.

The new feature builds on Tesla’s current autopilot through software updates, but this is still speculative.

Take a ride in a Tesla with Full Self-Driving Hardware.

It is unclear on when full autonomy will ship to the masses. Elon Musk said during a call in February that autonomy was around three to six months away, but he also said during a panel discussion at SXSW, last month that “self-driving will encompass all modes of driving by the end of the next year [2019].”

The autonomous future of cars is seemingly very nearly here.