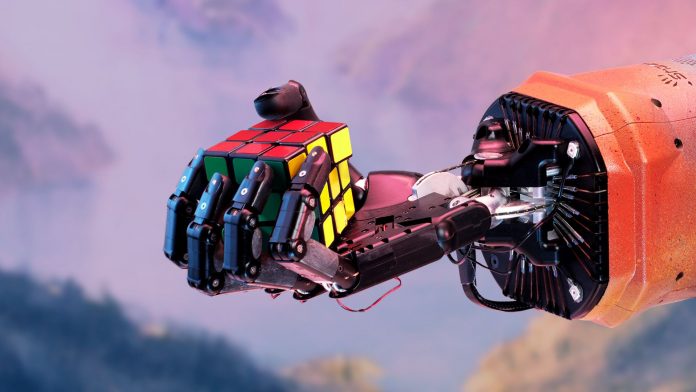 We’ve trained a pair of neural networks to solve the Rubik’s Cube with a human-like robot hand. The neural networks are trained entirely in simulation, using the same reinforcement learning code as OpenAI Five paired with a new technique called Automatic Domain Randomization (ADR). The system can handle situations it never saw during training, such as being prodded by a stuffed giraffe. This shows that reinforcement learning isn’t just a tool for virtual tasks, but can solve physical-world problems requiring unprecedented dexterity.

Human hands let us solve a wide variety of tasks. For the past 60 years of robotics, hard tasks which humans accomplish with their fixed pair of hands have required designing a custom robot for each task. As an alternative, people have spent many decades trying to use general-purpose robotic hardware, but with limited success due to their high degrees of freedom. In particular, the hardware we use here is not new—the robot hand we use has been around for the last 15 years—but the software approach is.

Since May 2017, we’ve been trying to train a human-like robotic hand to solve the Rubik’s Cube. We set this goal because we believe that successfully training such a robotic hand to do complex manipulation tasks lays the foundation for general-purpose robots. We solved the Rubik’s Cube in simulation in July 2017. But as of July 2018, we could only manipulate a block on the robot. Now, we’ve reached our initial goal.

Solving a Rubik’s Cube one-handed is a challenging task even for humans, and it takes children several years to gain the dexterity required to master it. Our robot still hasn’t perfected its technique though, as it solves the Rubik’s Cube 60% of the time (and only 20% of the time for a maximally difficult scramble).

We train neural networks to solve the Rubik’s Cube in simulation using reinforcement learning and Kociemba’s algorithm for picking the solution steps.[1]Domain randomization enables networks trained solely in simulation to transfer to a real robot. 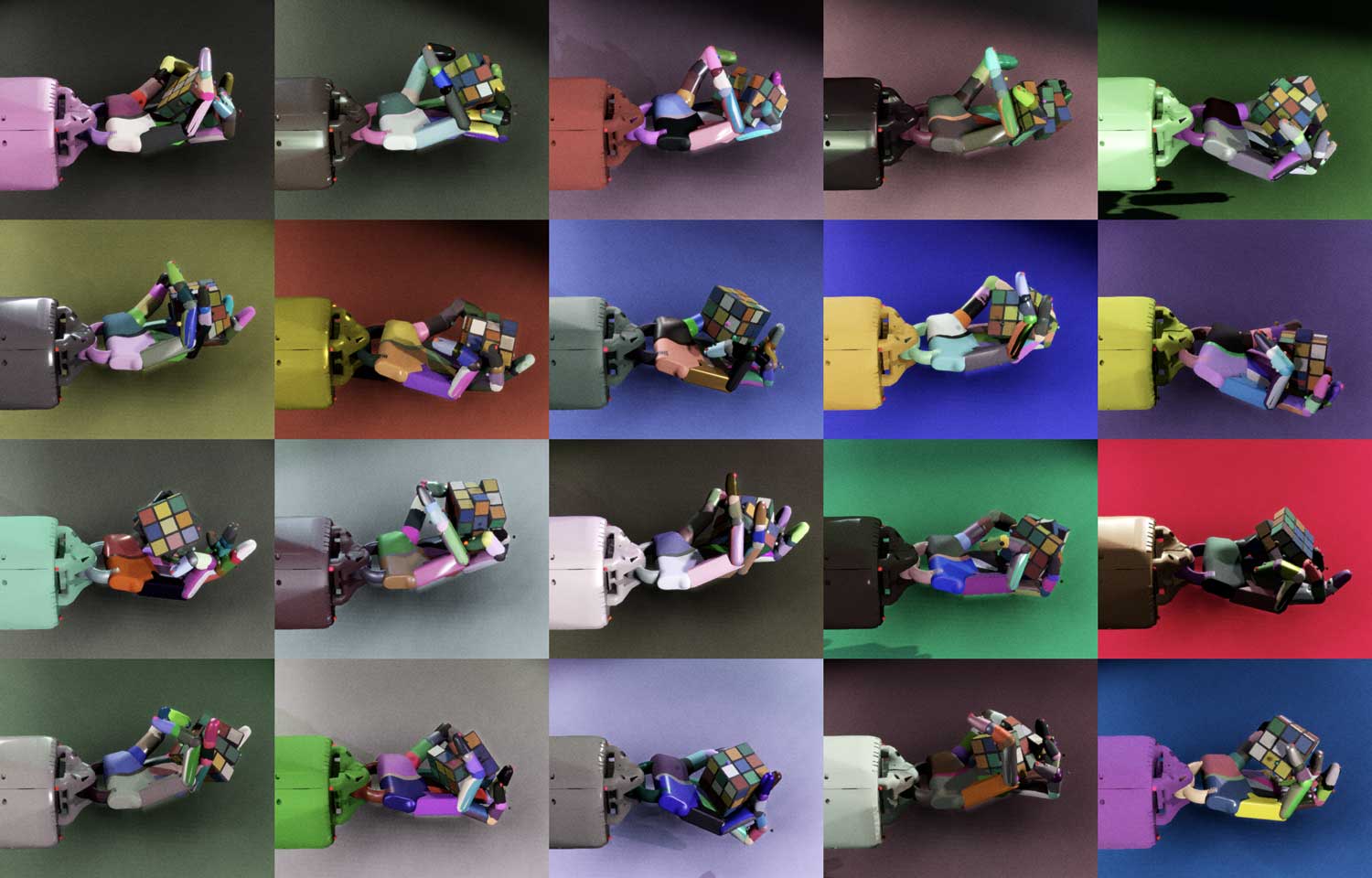 Domain randomization exposes the neural network to many different variants of the same problem, in this case solving a Rubik’s Cube.

The biggest challenge we faced was to create environments in simulation diverse enough to capture the physics of the real world. Factors like friction, elasticity and dynamics are incredibly difficult to measure and model for objects as complex as Rubik’s Cubes or robotic hands and we found that domain randomization alone is not enough.

To overcome this, we developed a new method called Automatic Domain Randomization (ADR), which endlessly generates progressively more difficult environments in simulation.[2] This frees us from having an accurate model of the real world, and enables the transfer of neural networks learned in simulation to be applied to the real world.

ADR starts with a single, nonrandomized environment, wherein a neural network learns to solve Rubik’s Cube. As the neural network gets better at the task and reaches a performance threshold, the amount of domain randomization is increased automatically. This makes the task harder, since the neural network must now learn to generalize to more randomized environments. The network keeps learning until it again exceeds the performance threshold, when more randomization kicks in, and the process is repeated.

ADR applied to the size of the Rubik’s Cube

We compared ADR to manual domain randomization on the block flipping task, where we already had a strong baseline. In the beginning ADR performs worse in terms of number of successes on the real robot. But as ADR increases the entropy, which is a measure of the complexity of the environment, the transfer performance eventually doubles over the baseline—without human tuning.

Using ADR, we are able to train neural networks in simulation that can solve the Rubik’s Cube on the real robot hand. This is because ADR exposes the network to an endless variety of randomized simulations. It is this exposure to complexity during training that prepares the network to transfer from simulation to the real world since it has to learn to quickly identify and adjust to whatever physical world it is confronted with.

Perturbations that we apply to the real robot hand while it solves the Rubik’s Cube. All videos play at real-time.

To test the limits of our method, we experiment with a variety of perturbations while the hand is solving the Rubik’s Cube. Not only does this test for the robustness of our control network but also tests our vision network, which we here use to estimate the cube’s position and orientation.

We find that our system trained with ADR is surprisingly robust to perturbations even though we never trained with them: The robot can successfully perform most flips and face rotations under all tested perturbations, though not at peak performance.

We believe that meta-learning, or learning to learn, is an important prerequisite for building general-purpose systems, since it enables them to quickly adapt to changing conditions in their environments. The hypothesis behind ADR is that a memory-augmented networks combined with a sufficiently randomized environment leads to emergent meta-learning, where the network implements a learning algorithm that allows itself to rapidly adapt its behavior to the environment it is deployed in.[3]

To test this systematically, we measure the time to success per cube flip (rotating the cube such that a different color faces up) for our neural network under different perturbations, such as resetting the network’s memory, resetting the dynamics, or breaking a joint. We perform these experiments in simulation, which allows us to average performance over 10,000 trials in a controlled setting.

We also measure failure probability and performed the same experiments for face rotations (rotating the top face 90 degrees clockwise or counterclockwise) and find the same pattern of adaptation.[4]

Visualizing our networks enables us to understand what they are storing in memory. This becomes increasingly important as the networks grow in complexity.

The memory of our neural network is visualized above. We use a building block from the interpretability toolbox, namely non-negative matrix factorization, to condense this high-dimensional vector into 6 groups and assign each a unique color. We then display the color of the currently dominant group for every timestep.

We find that each memory group has a semantically meaningful behavior associated with it. For example, we can tell by looking at only the dominant group of the network’s memory if it is about to spin the cube or rotate the top clockwise before it happens.

Behind the scenes: Rubik’s Cube prototypes

In order to benchmark our progress and make the problem tractable, we built and designed custom versions of cubes as stepping stones towards ultimately solving a regular Rubik’s Cube.[5] 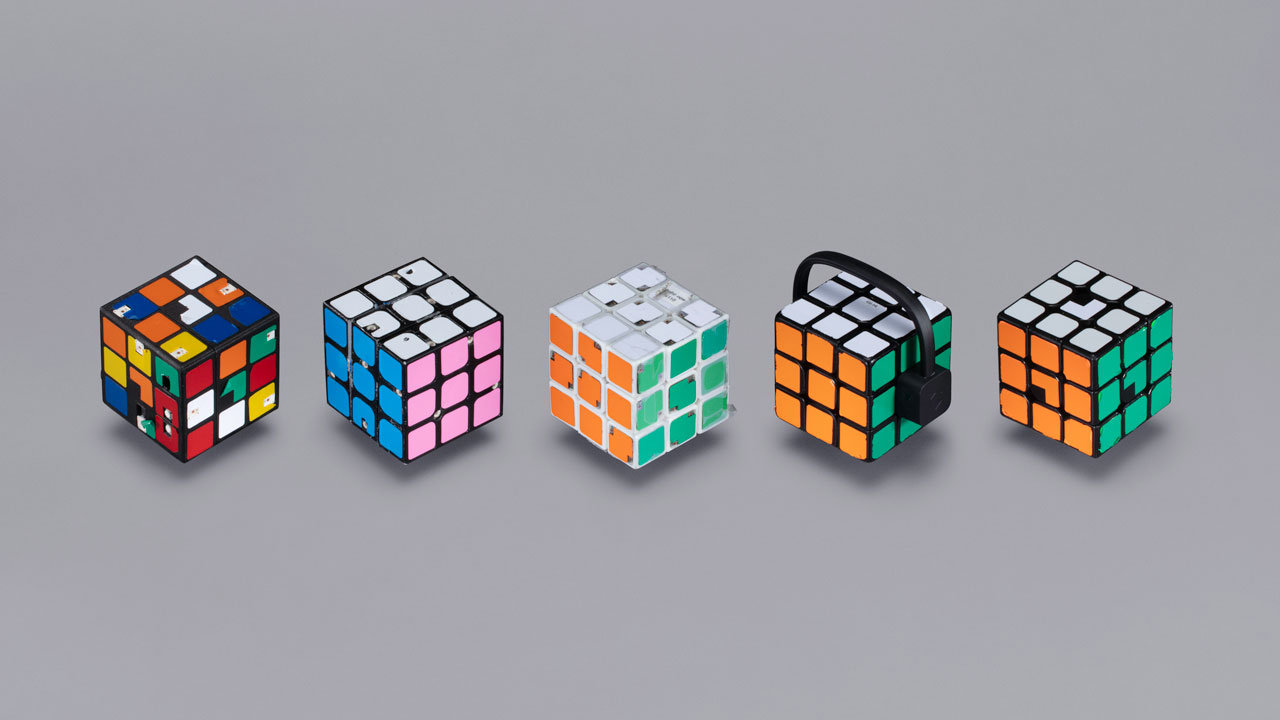 We believe that human-level dexterity is on the path towards building general-purpose robots and we are excited to push forward in this direction.

If you want to help make increasingly general AI systems, whether robotic or virtual, we’re hiring!