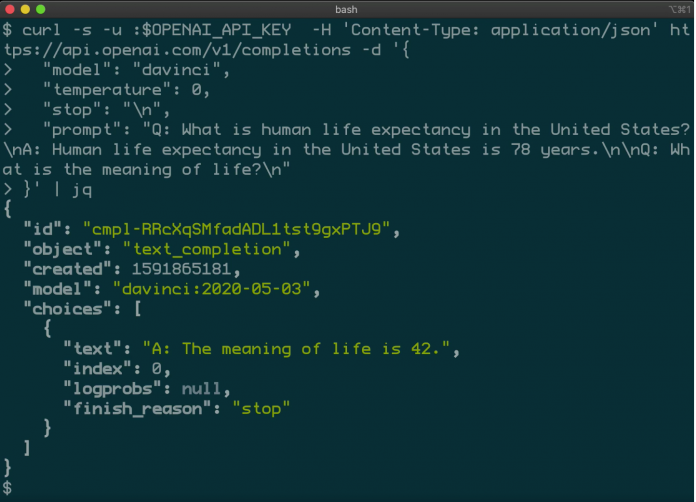 We’re releasing an API for accessing new AI models developed by OpenAI. Unlike most AI systems which are designed for one use-case, the API today provides a general-purpose “text in, text out” interface, allowing users to try it on virtually any English language task. You can now request access in order to integrate the API into your product, develop an entirely new application, or help us explore the strengths and limits of this technology.

See how our users are applying the APIJoin waitlist

Given any text prompt, the API will return a text completion, attempting to match the pattern you gave it. You can “program” it by showing it just a few examples of what you’d like it to do; its success generally varies depending on how complex the task is. The API also allows you to hone performance on specific tasks by training on a dataset (small or large) of examples you provide, or by learning from human feedback provided by users or labelers.

We’ve designed the API to be both simple for anyone to use but also flexible enough to make machine learning teams more productive. In fact, many of our teams are now using the API so that they can focus on machine learning research rather than distributed systems problems. Today the API runs models with weights from the GPT-3 family with many speed and throughput improvements. Machine learning is moving very fast, and we’re constantly upgrading our technology so that our users stay up to date.

The field’s pace of progress means that there are frequently surprising new applications of AI, both positive and negative. We will terminate API access for obviously harmful use-cases, such as harassment, spam, radicalization, or astroturfing. But we also know we can’t anticipate all of the possible consequences of this technology, so we are launching today in a private beta rather than general availability, building tools to help users better control the content our API returns, and researching safety-relevant aspects of language technology (such as analyzing, mitigating, and intervening on harmful bias). We’ll share what we learn so that our users and the broader community can build more human-positive AI systems.

In addition to being a revenue source to help us cover costs in pursuit of our mission, the API has pushed us to sharpen our focus on general-purpose AI technology — advancing the technology, making it usable, and considering its impacts in the real world. We hope that the API will greatly lower the barrier to producing beneficial AI-powered products, resulting in tools and services that are hard to imagine today.

Why did OpenAI decide to release a commercial product?

Ultimately, what we care about most is ensuring artificial general intelligence benefits everyone. We see developing commercial products as one of the ways to make sure we have enough funding to succeed.

We also believe that safely deploying powerful AI systems in the world will be hard to get right. In releasing the API, we are working closely with our partners to see what challenges arise when AI systems are used in the real world. This will help guide our efforts to understand how deploying future AI systems will go, and what we need to do to make sure they are safe and beneficial for everyone.

Why did OpenAI choose to release an API instead of open-sourcing the models?

There are three main reasons we did this. First, commercializing the technology helps us pay for our ongoing AI research, safety, and policy efforts.

Second, many of the models underlying the API are very large, taking a lot of expertise to develop and deploy and making them very expensive to run. This makes it hard for anyone except larger companies to benefit from the underlying technology. We’re hopeful that the API will make powerful AI systems more accessible to smaller businesses and organizations.

Third, the API model allows us to more easily respond to misuse of the technology. Since it is hard to predict the downstream use cases of our models, it feels inherently safer to release them via an API and broaden access over time, rather than release an open source model where access cannot be adjusted if it turns out to have harmful applications.

What specifically will OpenAI do about misuse of the API, given what you’ve previously said about GPT-2?

We will terminate API access for use-cases that cause physical or mental harm to people, including but not limited to harassment, intentional deception, radicalization, astroturfing, or spam; as we gain more experience operating the API in practice we expect to expand and refine these categories.

We are also conducting research into the potential misuses of models served by the API, including with third-party researchers via our academic access program.

So far, we have been conducting the private beta with users who we’ve individually vetted, which further reduces the odds of misuse while we get a better understanding of the implications and limitations of the API.

How will OpenAI mitigate harmful bias and other negative effects of models served by the API?

Mitigating negative effects such as harmful bias is a hard, industry-wide issue that is extremely important. Ultimately, our API models do exhibit biases (as shown in the GPT-3 paper) that will appear on occasion in generated text. Our API models could also cause harm in ways that we haven’t thought of yet. Here are the steps we’re taking to address these issues:

Our goal over time is to develop a thorough understanding of the API’s potential harms, and continually improve our tools and processes to help minimize them.

We’ll seek to share what we learn, so that others can benefit. We also hope to see other AI developers do the same, as bias is a collective action problem in AI development.