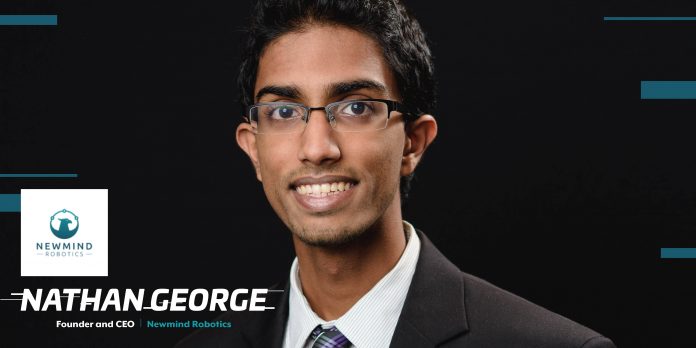 Newmind Robotics is a startup located in the Boston Area that creates robotics solutions, from fetching tennis balls to autonomously trimming plants to automating navigation for large vehicles. The company converts any robotics idea into a robotics business by creating software, hardware, and the infrastructure needed. Newmind’s core product is a robotics navigation app. Like how Microsoft created an operating system to allow computers to be mass-produced, the company is creating software to drastically lower costs for a mobile robot. Newmind is also creating the most affordable outdoors autonomous robot to quicken proof-of-concept for robotics startups to generate series investments.

The company was founded with the mission to make robots as accessible as computers by lowering the cost of the most expensive component: navigation software. The world needs robots to lower costs of goods, allow people to pursue more meaningful careers, and fix global issues like world poverty. Newmind is currently the only company tackling the most expensive part of a robot, with the potential to massively disrupt the space.

The company has a small team of engineers working to bring a new mind to the drone and robotics industry. Newmind abides by the principle to make life better by innovating and revolutionizing machines.

While envisioning an astonishing future ahead, Newmind wants to create a robotics app store, similar to Microsoft’s Windows or Apple’s App Store. The company believes the only way to do this is through a navigation platform: Newmind Navigation. Also, in addition to ground robots, Newmind wants to create autonomy software for drones and manipulators, to more affordably push the robotics revolution.

Nathan George is the Founder and CEO of Newmind Robotics. He is also the founder of Synergy Ministries, a Christian non-profit building a free smartphone app to find similar Christians in their area and find help for their daily problems.

At Newmind, Nathan spends his time building up the company’s various revenue streams. He creates robotics jobs and robotics contractors to work on them. Nathan built most of Newmind’s navigation app, working with a small team to finish the alpha product, and finding a group of beta testers. He builds his network by finding relevant robotics content and posts it on LinkedIn.

Nathan gained his bachelor’s and master’s degrees in Robotics Engineering from Worchester Polytechnic Institute. Before becoming an entrepreneur, he worked for Bloom Automation Inc as a Robotics Software Engineer and MedAcuity as a Software Engineer.

The Relevance of Funding for Startups

According to Nathan, the United States is exploding with small companies trying to create robotics startups, but 99% of them fail. The major reason why companies fail is that they had received less funding than they needed, and costs were higher than expected. By creating the most affordable outdoor robot and navigation software, these companies will have a much longer runway to beta test their product and achieve success.

Excelling with Innovation and Significant Partnerships

Newmind’s core innovation stems from its product Newmind Navigation. It is the only robotics navigation software than can give full navigation autonomy. Open-source ROS repositories only give a few features, specific software like BrainCorp’s only work for specific robots, and solutions like 6 River Systems only work in specific areas. The company’s software works for any robot and in any ground terrain. Newmind maintains the code long-term for improved features and reliability.

Nathan believes innovation within the computer or smartphone industries was based on a set of core software than needed to be maintained. Robotics is the same way and now has that software for sale. The company is augmenting its offering by partnering with various robotics hardware and software companies, like Freedom Robotics, for a cloud-based interface and data analytics.

Nathan says the core of Newmind Navigation is a type of Artificial Intelligence, known as Simultaneous Localization and Mapping. In addition to various algorithms, the company’s end-user applications usually involve Computer Vision or Deep Learning. For example, Newmind is creating a tennis ball robot that employs AI to find tennis balls, navigate to them, throw them at a player, and return to a waiting position.

After starting in August 2019, Newmind has worked on a dozens of robotics projects. Here are some feedbacks from the company’s clients:

“Hands down Nathan and his team are best we’ve had an opportunity to work with. They explained and answered every question we had, and listened to us. Very customer-oriented, fully understands tasks, milestones, and feedback. We recommend to anyone looking for quality and passion about the work they have.” – Mike Holmes

“Excellent experience. Nathan is extremely knowledgeable in robotics and image detection. Working with him on a follow-up project now.” – Eric Guthrie

The biggest challenge to Newmind was a steady source of revenue. Because Nathan is waiting to secure seed funding while Newmind Navigation is in beta, the main source of revenue was either from family investments or contracts. As robotics is an emerging market, many clients undervalue how much the work is worth. Newmind’s largest challenge is convincing clients who don’t have a background in robotics and that their projects will likely cost 5x while still creating a good experience, despite robotics projects tend to fail.

Initially finding robotics contracts was difficult, but the company found some ways to market online. Technically, the largest challenge is tuning hundreds of parameters, creating dozens of algorithms, and integrating them nicely into a package.

An Ambitious Roadmap of Future Expansion

As Newmind continues to secure more and larger contracts, its goal is to continue to scale the agency work while creating many small robotics companies using Newmind Navigation. If the company can successfully help create other companies using this model, its brand will exponentially grow as the robots do, and Newmind can expand into other areas like arm manipulation and drones.

“We believe the robotics industry as a whole will become like the computer industry. In the beginning, it was expensive to own a personal computer and it didn’t have many features. Over time, the costs will slowly reduce and the features will slowly increase to where robots will become vital to any individual, organization, or industry”, said Nathan.