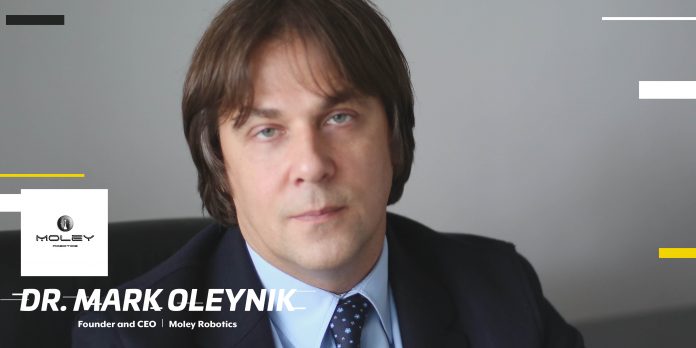 The need for RoboChef, the world’s first fully automated robotic kitchen was identified in 2013 when Dr. Mark Oleynik detected a gap in the current robotics market to radically change the volume of service, economics and carbon footprint. RoboChef is a leap forward from the current state-of-the-art applications in the market. Unique amongst today´s robotic kitchen service applications, it facilitates the input of a human chef’s actions to prepare a dish to reproduce the pattern of movements, mimicking the input information.

With RoboChef, consumers and professional chefs alike can develop, demonstrate, share and sell their recipes on a cloud-based recipe-sharing platform. For users RoboChef is a greatest time-saving and value generation technology in the service robotic market. Users select a menu remotely, have ingredients delivered and get a scheduled meal on time 24/7.

Accelerating Robotic Developments for the Mankind

Since its POC prototype launch in 2015, RoboChef’s product development team has seen steady progress and innovative technology and received prestigious awards. In 2015, Moley Robotics delivered a successful prototype during Hannover Messe in 2015. In 2020, the company completed pre-production A-model development and started certification and testing procedures. The product launch will take place in 2020, and the product will be presented in all 16 target European countries within two years.

Moley Robotics was set up with a mission to combine automatic food preparation at home and eating a healthy diet. The company aims to produce technologies that address basic human needs and improve the day-to-day quality of life.

Dr. Mark Oleynik is the Founder and CEO of Moley Robotics. Mark is an accomplished Ph.D. mathematician, computer scientist and proven trailblazer. Before founding Moley Robotics, Mark was a co-founder and a major shareholder of several companies working in the healthcare sector in Russia and internationally.

Earlier in his career, Mark exercised his passion for building successful products at Pavlov First Saint Petersburg State Medical University and smaller companies. He is a future driven leader and a passionate robotics and healthcare expert.

While the robotics industry has used a rather primitive and same-type “record – playback” operation, Moley Robotics has created a “one robot – many operations” concept by dividing big robotics operations into smaller ones, teaching the Robot to fulfill them without errors, and consecutively collecting them into more difficult processes (cooking, cleaning, medical help).

Moley Robotics has applied for five large patents worldwide, many of them have been granted already. The company is now focusing on the development of the first truly robotic service application for home use, which will significantly increase the quality of life of many people. Moley Robotics counts unlimited access to wide recipes database, cultural exchange, nutrition standardization based on preferences and health conditions, increasing nutrition options, freshly-cooked and varied meals, entertainment, cooking courses, time-saving, opportunity to record customized recipes among the benefits derived by its clients.

Innovating the Future of Cooking

Moley Robotics answered an opportunity call by developing a class of technology that has never been applied to any food preparation application. Now a verified and demonstrated prototype at TRL7, RoboChef is a leap forward from the current state-of-the-art robotic kitchen service applications. It facilitates the input of a human chef’s actions to prepare a dish and reproduces this sequence of movements, mimicking the input information.

Robotics had a limited application until now and was only applied to a very limited range of foods such as automated hamburgers and pizzas. The revolutionary RoboChef is expected to increase the kitchen human resource efficiency by 50-70% and cut industrial CO2 emissions from kitchen operations by 15-30%. RoboChef works with two highly complex, fully articulated hands that comprise the kitchen’s enabling technology. With the ability to faithfully reproduce the functional movements of a human hand, they give the capability to cook anything a human chef can in the kitchen.

RoboChef is developed with a heart of the design philosophy that underpins this technology. Every motion and nuance are captured from a chef, which are then translated into digital movement using bespoke algorithms created with the collaboration between Moley Robotics and teams from Shunk (Germany), an internationally-renowned company and world experts in modelling robotic processes and complex associated engineering challenges, Universities of Stanford (USA) and Carnegie Mellon University.

The Moley Robotics robot does not just cook like a chef in terms of skill, technique and execution, moreover, it can also clean after cooking, which is a great value proposition for those who choose to save time on this boring activity. Additionally, it also captures the human skill in motion. This motion-capture technique is used to generate an ever-growing digital library of recipes for the Moley kitchen to cook. User-friendly motion-captures and translation systems allow consumers and professionals alike to record and share their recipes on a digital library across multiple markets. This not only provides a fantastic utility for the users, but also actively promotes their interest in high quality foods and international cuisine.

The robot chef moves at a human speed, rather than that of a machine which helps users to connect with and enjoy the system, and does not feel like a piece of industrial technology or threatening artificial intelligence. With precision cooking, Moley Robotics aims to reduce food waste and provide a viable alternative to ready meals. The company aims to reduce the dependence on pre-packaged food which are highly manufactured items requiring a great deal of energy into intensive processing, packaging and transport.

Technologies Paving the Way for a Virtual Disruption

With the rise of disruptive technologies, innovation itself is the optimization of either virtual, or physical environment by enlarging the functionality and time/material resources optimization. Thus, the need is to either expand the current available variability (more flexible planning and realization system), or optimize time, virtual or material resources. So, any tasks aimed at optimization or functional expansion are innovative. From an AI and Robotics point of view there are many innovations in the virtual environment (online shopping, delivery, search, information storage, etc.), while the physical environment is much more difficult to develop and time-consuming.

“Robotics is one of the most complex industries for innovation, it is comprised of many moving parts unified by one control system, allowing to substitute human force with automated machine force. The more difficult the tasks are, the more difficult it is to automate them in a physical world,” said Mark.

Moley Robotics harnesses its service robotics in the industry moving from “one robot – one operation” scheme to creating robots which can perform a sequence of operations, devoting certain timing from cooking to playing piano to healing patients. Important being, this process is divided into small operations, each of them verified from functional result point of view, tested and confirmed with the repetitive result preserved with no errors to create a long technical process, optimizing physical world at a large scale to fulfill complex operations.

Moley Robotics was awarded the Best of the Best award at CES 2015 Asia Shanghai and was recognized as a Top Key Player in the Global Robot Kitchen Market 2020 report.

Overcoming the Challenges to Move Ahead

As any product development company, Moley Robotics has an obligatory development, testing and design evaluation cycles to pass before entering the market. Its product combines all the levels of hardware and software products.

Being a small company, its main challenge was to find reliable and experienced partners for product quality subsystems development to get minimal viable product functionality on a competitive level. Preserving the traditional look of the kitchen and old-fashioned cooking style, while adding a machine function was an added challenge which the company overcame.

Towards an Autonomous Future

Mark cites the automotive industry’s example where cars were an initial symbol of wealth, to the present The Most Disruptive Robotics Companies of 2020 magazine issue day where almost every family can afford them, all owing to significant developments in technology. Moley Robotics would like to make its kitchen affordable for any family worldwide by going through all the stages of mass-market product optimization.

In the near future, the company would like to integrate its solution into other service robotics areas, medicine for instance (emergency/medical service home healthcare manipulations), or 3D environmental services.