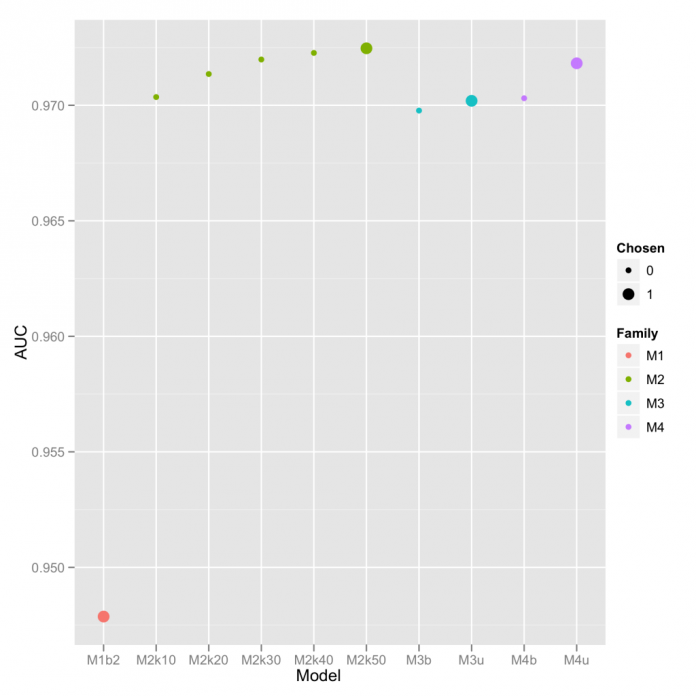 I treat R package recommendation as a binary classification task: a classifier $latex f(u, p)$ takes as input a user $latex u$ and a package $latex p$, and predicts whether the user will install the package or not. My final submission (team name: Record Me Men) combines four classifiers, labeled as large dots in Figure 1. The four classifiers share the same form of objective function that minimizes loss $latex L$ plus regularizers $latex R$:

Model 1: Baseline. Model 1 is example_model_2.R that the competition organizer provides as a baseline. In this model, a user is encoded as dummy variables $latex mathbf{u}$, and a package is represented by seven features $latex mathbf{p} = {p_1, dots, p_7}$ (e.g, the logarithmic count of dependency. See the R script for the complete list). The classification model is a linear combination of user dummy variables and package features with weight parameters, $latex f(u, p) = mathbf{theta_u}^T mathbf{u} + mathbf{theta_p}^T mathbf{p}$. The parameters are $latex theta_u$ and $latex theta_p$ (and intercept). The loss function $latex L$ is negative logistic log likelihood. There is no regularizer in the model.

The first model establishes a strong baseline, achieving AUC of ~0.94, labeled as M1b2 in Figure 1. A variant of this model that omits the user feature (see example_model_1.R, also provided by the contest organizers) achieves noticeable lower AUC of 0.81 (not shown in Figure 1). This suggests that some users are more likely to install R packages than others. In the next model, I will explore a classification model that incorporates not only user variations but also package variations.

Model 2: Latent factor Models. In contrast to Model 1 with features derived from metadata, I focus on the user-package rating matrix. Model 2 consists of two components: baseline estimates and latent factors. Baseline estimates are linear combinations of three parts: global (one parameter $latex mu$), user (one parameter per user $latex mu_u$), and package (one parameter per package $latex mu_p$). For latent factors, I assumes that there are K latent factors for each user, $latex mathbf{beta}_u$ and each package $latex mathbf{beta}_p$, and the inner product of these two factors captures the interaction between a user and a package. The classifier model in Model 2 is $latex f(u, p) = mu + mu_u + mu_p + mathbf{beta}_u^T mathbf{beta}_p$. This kind of latent factor model, also known as “singular value decomposition”, has been reported with great success in previous collaborative filtering studies and at the Netlifx Prize. I choose an exponential loss function for Model 2, $latex L(y, f(u, p)) = exp(- y f(u, p))$,

Model 3: Package LDA topic. In Model 3, I explore new features not used in Model 1 and 2. The new feature is a package’s topic based LDA (Latent Dirichlet Allocation). The LDA topic of a package is inferred from the word counts of its man pages. I use the topics.csv, kindly prepared by the contest organizers, to map a R package to one of the 25 LDA topics (See topic_models.R for details on running LDA, provided by the contest organizer).

Model 3 achieves better AUC than Model 1, resulting in AUC of ~0.97 (labeled as M3u in Figure 1). Prior to M3u, I explore a simpler model that users share the same weights $latex mathbf{t}$. The parameter space becomes smaller, but Model 3 with shared parameters (labeled as M3b in Figure 1) performs slightly worse than Model 3 with user-specific parameters. This makes sense because it is unlikely every R user shares the same interest in the same set of LDA topics.

Model 4: Package task view. R packages are organized into task views (e.g., high-performance computing, survival analysis, and time series. See the page for the complete list of views). It is possible that a user interested in a particular task would install not just one but many, even all, packages in the same task view (e.g., using install.views() R function). We could improve recommendation if we know how much a user is interested in a particular task view. I use the views.csv, provided by the contest organizers, to map a package to its task view.

The classification model of Model 4 is similar to Model 3, except that LDA topics in Model 3 are replaced with task views (T=29, 28 task views plus 1 unknown view). The performance of Model 4 is labeled as M4u in Figure 1. Model 4 performs well and better than Model 1. Similarly, I experiment with a variant of Model 4 that all users share the same task view parameters $latex mathbf{t}$, labeled as M4b i n Figure 1, and it performs worse than Model 4 with per-user parameters. The finding is consistent with Model 3, and R users, at least on the R recommendation data set, seem to have different preferences in task views.

The ensemble learning works very well, as shown in Figure 2. Combining M1 and M2 achieves AUC of 0.9721, which is higher than either M1 0.94 or M2 0.9702 alone. When I combine more models and include M3 and M4, the performance gets even better. The submission of combining four models achieves best performance on the training set among all models. On the test set the final model achieves AUC of 0.983289 (after post-processing, see below), the highest among my submissions. The success of ensemble training is possibly because the individual models are strong performers, and models are diverse with different classification models and features such that they complement each other.

Post-processing. I apply two post-processing steps before submitting each entry. First, the label and (user, package) association on the training set is memorized. For any (user, package) pairs in the test set that are already seen in the training set, their labels on the training set are recalled and used instead. Second, I assume when a user install a package P, the user also installs the packages that P depends on. I record all packages a user installs on the training set as well as their dependent packages. Given a pair (U, P) on the test set, if the package P is found in the set of the packages on which the user U’ installed packages depend, I ignore the prediction and output 1.0 instead. Although the dependency assumption does not completely hold true (there are known contradictory examples on the training set), the two filters combined increases absolute AUC ~0.004, which matters in a competition with razor-thin margins between leading submissions.

I develop the classification training programs for Model 2, 3, and 4 in Python. I use R to explore data, run logistic regression (glm() in the stats library), calculate AUC (performance() in the ROCR library), and plot results (ggplot() in the ggplot2 library). All programs are developed and run on a commodity PC with dual-core 2GHz CPU and 4G RAM. I make the source codes available at github.

Although my submissions are based on only the data the contest organizers provide and simple linear models, by no means you should stop here. There are many directions worth exploring, for examples, crawling CRAN to analyze the rich graphs of depends, imports, suggests, and enhances between R packages. In an open-end contest like this, the sky is the limit.

Max Lin is a software engineer with Google Research in New York City office, and the tech lead of the Google Prediction API. Prior to Google, he published research work in video content analysis, sentiment analysis, machine learning, and cross-lingual information retrieval. He has a PhD in Computer Science from Carnegie Mellon University. He would like to thank the organizers of the R package recommendation engine competition for their hard work and efforts in putting this competition together. He participates the competition as individuals, and writes all codes in his spare time. Nothing expressed here may or should be attached to his employer.

Originally published at blog.kaggle.com on February 22, 2011.

Max Lin on finishing second in the R Challenge was originally published in Kaggle Blog on Medium, where people are continuing the conversation by highlighting and responding to this story.