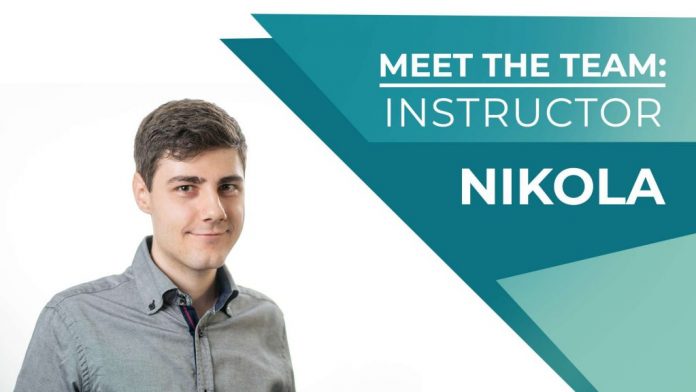 Nikola Pulev is a Natural Sciences graduate from the University of Cambridge, in the UK, turned Data Science practitioner and a course instructor at 365 Data Science. Nikola has a passion for Mathematics, Physics, and Programming. Over the years, he has taken part in multiple national and international competitions, where he has won numerous awards. He also holds a silver medal from the International Physics Olympiad.

Hi Nikola, could you briefly introduce yourself to our readers?

Hi, my name is Nikola and I am a Cambridge Physics graduate turned data scientist.

That’s indeed the definition of a brief introduction (and I believe it sparked interest among our readers). So, what do you do at the company and what are the projects you’ve worked on so far?

Well, I am part of the 365 Data Science Team in the role of a course creator. Course creation is, in general, a collaborative effort. There are lots of people involved in the creation of each course. Basically, my part is to do continuous in-depth research of the topic and use my expertise to write the content of the course.

So far, I have developed the Web Scraping and API Fundamentals course along with Andrew Treadway. This was a very exciting project for me, as it was my first course for the company.

The course was warmly received by our students and we couldn’t be happier about it. That said, what are you working on right now, Nikola?

While working on this awesome new addition to the 365 Data Science program, how do you help your students through the Web Scraping learning process?

Although our courses are online, the students have the opportunity to ask all the questions they have in the Q&A Hub. I do my best to answer those questions as thoroughly as possible. However, in my opinion, a good teacher should aim to answer the question a student may have before the student themselves asks it. So, in my courses, I constantly try to detect the stuff that may be confusing and clarify them in more detail.

Speaking of details, can you tell us a bit more about your academic background and experience?

So, I have graduated from the University of Cambridge as a Natural Scientist, although I mainly specialized in Physics. I have always had a passion for mathematics and science in general, as well as coding. Not necessarily as a programmer, but I do like to create little programs to solve problems – whether it would be to automate some tasks or to create simulations.

How do you apply these skills in your position now?

The years in university and Physics in general, have taught me to think analytically and to research topics extensively. Also, I have a circle of friends that are into science as well, and we frequently exchange knowledge. So, in that regard, I am practicing both my analytical and my teaching skills.

When I graduated, I wanted to do something that would include mathematics and coding and that can be applied in practice. Data science seems to provide a good mixture of those. But that was not the only factor in my decision

365 Data Science was the main factor – they provided me with the opportunity to contribute to society in a positive manner. And teaching makes me feel accomplished in so many ways!

As for the team itself, they are very professional and great group of people!

I couldn’t agree with you more on that! In fact, your teammates were eager to ask you some questions themselves, so the next few questions come directly from them. Do you accept the challenge of answering those?

Alright! If you had to battle 100 duck-sized whales or 1 whale-sized duck which would you choose?

Obviously the 100 duck-sized whales – they don’t have teeth or beaks and they are only in water.

I can definitely see you surviving the Apocalypse with this answer, Nikola! So, if you suddenly became the ruler of the world what would be the first thing you would do?

I would ban alarm clocks and make it so that there is no need to wake up early (I have to take care of my fellow night owls after all). Then, I would wake up to the sound of my alarm and realize it was all just a dream – too good to be true…

I think you just scored some major points with all night owls on the 365 Team (which is about 90%). Now, before I leave you to your students’ Q&A, let’s wrap things up with our signature final question: Is there a nerdy thing you’d like to share with the world?

Recently, a friend of mine dropped the bombshell that vectors can be considered as a generalization of tensors and not the opposite, which is mindboggling. Normally, I wouldn’t go around scaring people with this info, but since you asked…

Oh, wow, I believe our readers will demand a dedicated blog post on this one! Thanks for taking the time for this interview, Nikola. We wish you tons of success with your new course and all upcoming 365 Data Science projects!