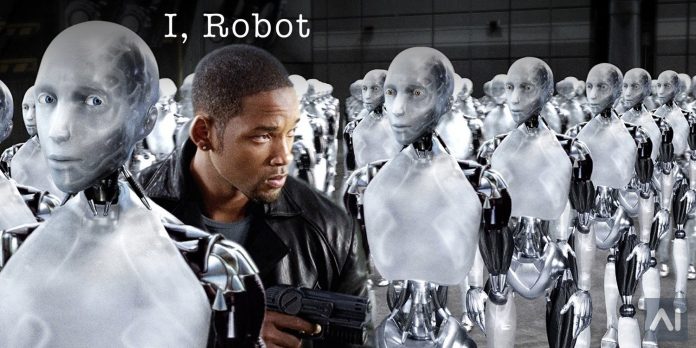 I, Robot is a 2004 American science fiction action film directed by Alex Proyas. The screenplay by Jeff Vintar and Akiva Goldsman is from a screen story by Vintar, suggested by Isaac Asimov’s short-story collection of the same name. The film stars Will Smith, Bridget Moynahan, Bruce Greenwood, James Cromwell, Chi McBride and Alan Tudyk.

In the year 2035 a techno-phobic cop investigates a crime that may have been perpetrated by a robot, which leads to a larger threat to humanity.

It received mixed reviews from critics, with praise for the visual effects and acting but criticism of the plot. At the 77th Academy Awards, the film was nominated for Best Visual Effects.

In 2035, technophobic homicide detective Del Spooner of the Chicago PD heads the investigation of the apparent suicide of leading robotics scientist, Dr. Alfred Lanning. Unconvinced of the motive, Spooner’s investigation into Lanning’s death reveals a trail of secrets and agendas within the USR (United States Robotics) corporation and suspicions of murder. Little does he know that his investigation would lead to uncovering a larger threat to humanity.

It’s a decent soundtrack, but it’s also no Tarantino movie so you can expect a typical high-end Hollywood soundtrack. I really liked the track title “Dead Robot Walking”. I likely won’t be listening to this soundtrack on its own again.