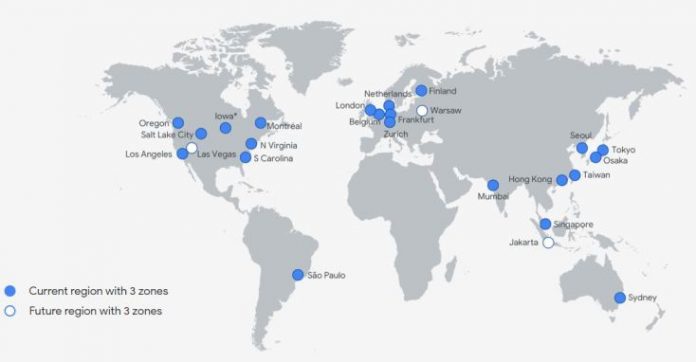 The big cloud providers are expanding globally by adding more Global Regions. Google recently announced a new mountain west region. Plus, all the other providers have plans to expand globally. This got me wondering, which provider has the most global regions. I went to all the big cloud provider websites, and I was a bit surprised with the results.

I first went to Google to see where there global regions are located. They have good coverage in the United States, East Asia, and Europe. Overall, Google has 22 global regions.

Amazon Web Services (AWS) has been a leader in the cloud provider market. They have very similar coverage to Google. Both leave Australia, South America, and Africa with little to no coverage. AWS has 22 regions.

Honestly, I had a hard time comprehending the IBM map. They only have 6 regions and they sort of hide them on the map. I believe they added a bunch of dots and lines to make the coverage look better.

Oracle has a whopping 21 regions. I did not expect that from Oracle. From a region perspective, Oracle is right in the mix with AWS and Google.

Microsoft Azure has 57 global regions! That is 2.5 times greater than the nearest competitor. Azure has much better coverage in India with 3 regions; 2 regions in Africa, and 4 in Australia. Also, Azure is the first provider with a region planned for Mexico.

Overall, you will notice Africa and South America do not have much coverage. Azure is the only provider with any regions currently in Africa. There is still a lot of work to expanding the regions more globally, but Microsoft Azure has a large advantage right now.

The post Azure has the most Cloud Regions, and it’s not even close appeared first on Data Science 101.