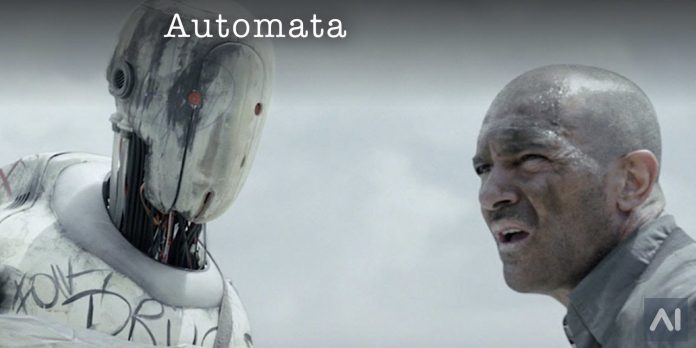 In 2044, solar storms have killed 99.7 % of the world’s population and only 21 million people survive. The ROC Corporation has designed and built robots called Automata Pilgrim 7000 to help to rebuild the world. These robots have two security protocols; they can neither harm humans nor alter themselves or other robots. When police officer Sean Wallace shoots a robot and claims that it was altering itself, ROC insurance agent Jacq Vaucan is placed in charge of the investigation. Soon he believes that there is a “clocksmith” illegally modifying the robots. Jacq wants to live on the coast and asks his boss and friend Robert Bold to transfer him with his pregnant wife Rachel Vaucan to the coast. Robert offers the possibility if Jacq resolves the case. Jacq and Wallace go to a brothel where the modified robot Cleo attends and Wallace shoots its leg, expecting that the owner will lead them to the clocksmith. They meet Duprè but she is not the clocksmith that is modifying the robots. [Claudio Carvalho]