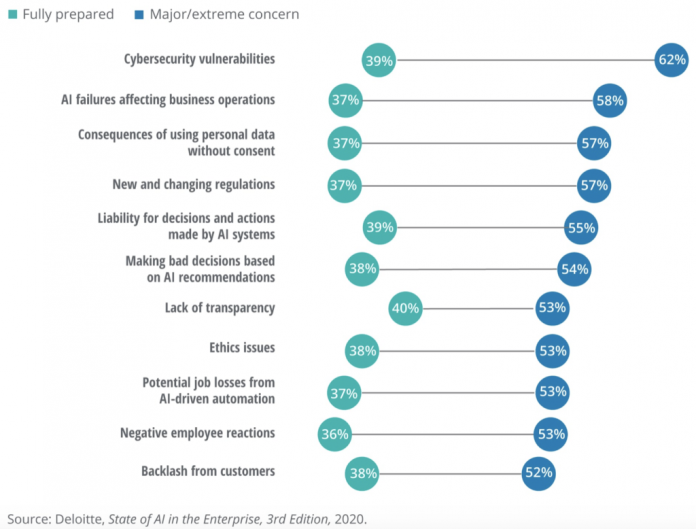 More than half of early AI adopters said they have invested more than $20 million on AI technologies and talent during the past year as they seek to harness machine automation to differentiate their services and create new products.

An annual AI adoption survey released this week by business consultant Deloitte also concludes that the early-mover advantage of AI pioneers may be fading as more companies embrace the technology. One reason is that AI deployments are being widely integrated in enterprise applications.

“Capabilities are advancing, [and] it is becoming easier to develop and implement AI applications, and companies are seeing tangible benefits from adoption,” the Deloitte survey concludes. “Governments have developed national strategies for AI and are making substantial investments in research and education. They are also crafting ways to better govern the use of AI technologies to protect and benefit society.”

Still, security and ethical risks remain, as does a continuing lack of talent. The survey found that only 47 percent of all AI adopters said they possess the expertise to select the appropriate technology for a given use case or the right technology vendor.

“AI will be viewed as a necessity by more and more organizations in a post-Covid-19 world, and the leading organizations are figuring out how to make it a strategic competitive advantage,” said Paul Silverglate, a Deloitte vice chairman. “In a future where AI is ubiquitous, adopters should be creative, become smarter AI consumers, and establish themselves as trustworthy guardians of customer data in order to remain relevant and stay ahead of the competition.”

Along with cyber security, the most worrisome AI risks include a growing list of data privacy rules and misuse of personal data. The survey found that most AI adopters remain concerned about their ability to address AI risks ranging from unintended bias to determining accountability for data misuse.

Those risk have prompted a majority of respondents (56 percent) to rethink their adoption of AI technologies, and an equal number said a consumer backlash over ethical and other transgressions will hinder or stop the adoption in some automation technologies. Regulatory uncertainty is another worry. For example, a data privacy decision handed down this week by the European Court of Justice ruled that companies moving personal user data cross-border from the European Union must provide the same privacy protections offered within the EU.

U.S. officials and IT industry critics blasted the ruling, known as the Schrems II case, as invalidating data protections under the EU-U.S. Privacy Shield. In July 2016, the European Commission deemed the framework “adequate to enable data transfers under EU law.”

Predictably, only 37 percent of Deloitte survey respondents said they are “fully prepared” to handle new and changing data privacy regulations.

The post As AI Matures, So Too Do Risks, Survey Finds appeared first on Datanami.