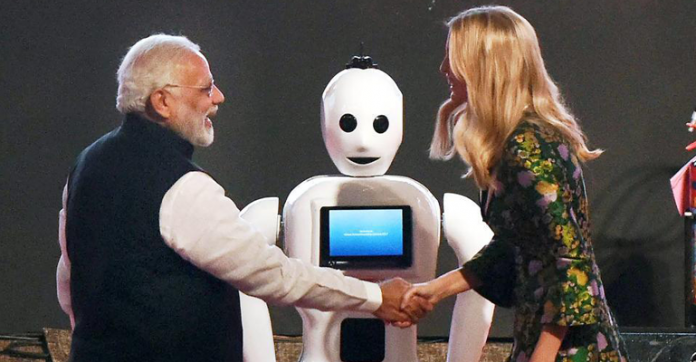 Pic: Mitrabot, A Made in India robot greeting the Prime Minister and Ivanka trump

A team from Cambridge University studied depictions of AI systems in stock images, movies, TV, search results, and robots. They found that the vast majority of them were portrayed as white. The researchers fear these depictions are creating a homogenous tech workforce who bake racial bias into their algorithms. “People trust AI to make decisions. Cultural depictions foster the idea that AI is less fallible than humans. In cases where these systems are racialized as white that could have dangerous consequences for humans”.  The bot’s being manufactured in white is just one problem. The voice of these robots and even the voices of our intelligent voice assistants on smart home devices point to the same bias.

If the developer demographic does not diversify, AI stands to exacerbate racial inequality

Many believe that the developer demographic being skewed in favor of the White population is leading to the bias. That could also explain the fact the popular voice assistants such as Apple Siri, Google Assistant and Amazon Alexa having an American accent and being trained better in all ‘white’ accents. Having many Indian developers could also be influencing the introduction of Indian accents in these assistants.

The already small developer community from a few continents may not be the only reason for the racial bias. It could also be that the consumer market in those nations are currently not large enough for the tech giants to train the AI programs on new accents. For example, Google Assistant was better trained in Indian accents – not because an Indian heads the company or that it has development centers in India, but because billion’s in India use the Android devices.

When Indian bot manufacturer’s like Balaji Viswanathan’s Mitrabot, Manav and others  start to sell their robots largely for domestic use,  they may look to introduce them in Indian languages. However it’s not as easy as it sounds. While the shell of the body may be easy to change, the voice needs training in many languages and then the myriad dialects of each language. For small countries in Africa, their market size may be too small to justify such an investment for atleast a few decades.

But these are early days in the development of Artificial Intelligence. One can only hope that these asymmetries get corrected over a period of time.