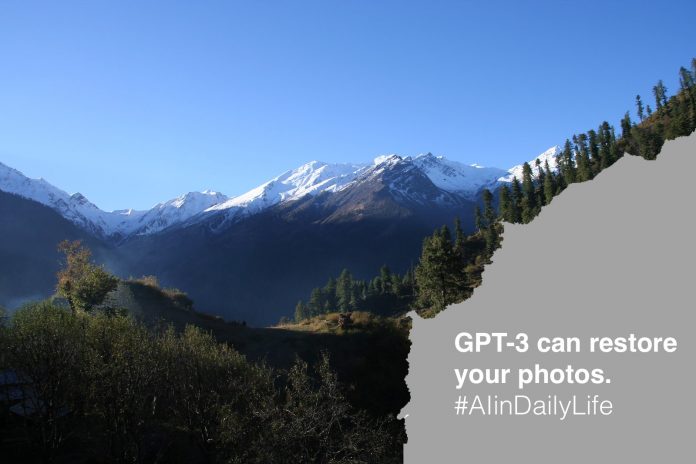 Do you have old damaged photos of your parents or your childhood? or perhaps your old hard disk backup of digital photos now have only a part of it being rendered. Artificial Intelligence can now meaningfully complete a half photograph by analyzing several photographs.

Image GPT – a transformer model built by OpenAI analyzes pixel sequences to generate missing parts of an image, just like its earlier models analyzed sequences of text to generate coherent text. Unsupervised and self-supervised learning, or learning without human-labeled data, is a longstanding challenge of machine learning. Recently, it has seen incredible success in language, as transformer2 models like BERT,GPT-2,RoBERTa have achieved top performance on a wide array of language tasks. However, the same broad class of models has not been successful in producing strong features for image classification.

Reserarchers from OpenAI, an AI research and deployment company based in San Francisco, California have now used the same ‘Generative sequence modelling’ to create this incredible program.

Model-generated completions of human-provided half-images. Notice how close to reality the AI generated image is.

This could very well be the beginning of smarter photography, smarter image editing tools and can potentially have wide ranging implications in forensics, where photographic evidences are used. This seems to be only the beginning of how General purpose training or GPT is being used. Open AI has already published articles on how music can be generated using a similar technique.

The computer generated photos and music require huge compute power today which may slow down its main stream adoption immediately. But given the rapid evolution of new data models and compute power, you could see this model getting deployed in many commercial applications. Open AI publishes an API that can accelerate the mainstream adoption of these models, creating a symbiotic relationship between learning and technology development. This is similar to IBM Watson and Google tensor flow allowing developers to use the platform for free, while its own models were learning from the melange of applications that its developers built on.